An AED is a small, portable device that analyzes the heart's rhythm and prompts the user to deliver a defibrillation shock if it determines one is needed. Once turned on, the AED guides the user through each step of the defibrillation process by providing voice and/or visual prompts. 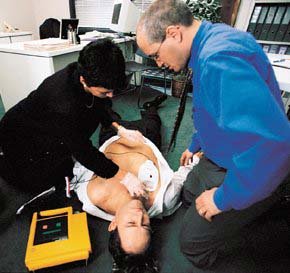 AEDs are specially designed for easy use by a "first responder", who would be the first person to typically arrive on the scene of a medical emergency. A first responder can be an emergency medical service worker, a firefighter or police officer, or it can be a layperson with minimal AED training.

Time to defibrillation, the most critical factor in Sudden Cardiac Arrest (SCA) survival, can be reduced if an AED is "on-site" and can be brought to the victim quickly. This is one of the reasons that survival rates improve in communities with active AED programs. Remember, every minute that passes before defibrillation reduces survival rates by 7-10 percent.

The goal is to improve SCA survival rates…..on-site protection in case of Sudden Cardiac Arrest and having AEDs can make the difference.

How the shock fixes SCA

The delivery of an electrical shock to a heart experiencing SCA briefly stops all electrical activity in the heart. This brief "break" from the previous electrical chaos can be enough for the heart to restart beating with a normal rhythm.

Not everyone can be saved from SCA-even with defibrillation. But early defibrillation, especially when delivered within three minutes of a person's collapse from SCA, does provide the best chance.

Click one of the images below to view a demonstration of a defibrillation shock.

How does an AED work?

Once an AED is turned on, it provides prompts to guide the user through the process. One of the first prompts instructs the user to connect the AED to the victim via the adhesive electrodes (pads) placed on the chest. The AED then analyzes the victim's heart rhythm through the electrodes using a built-in computer program. It then determines if a shock is "needed" or "necessary." More specifically:

Who can use an AED?

Almost anyone can learn to operate an AED with a few hours of training-no medical background is needed to use an AED.

AEDs are designed to help people with minimal training safely use them in tense, emergency situations. They have numerous built-in safeguards and are designed to deliver a shock only if the AED detects that one is necessary.

Their ease of use and built-in safety mechanisms makes AEDs suitable for use in community or company-wide programs.

You can help create a Heart Safe Community by learning to use an AED and/or helping to place AEDs in public places.

Why should we purchase an AED? 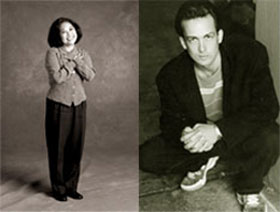 Early defibrillation with an on-site AED can be the difference between life and death.

The time to the first defibrillation shock is the most critical factor in determining survival rates for Sudden Cardiac Arrest (SCA). With every minute that goes by, survival rates decrease by about 10%. That leaves a window of ten minutes in which to potentially save your life or the life of someone you know, after which survival rates average less than 2%.

The best results for defibrillation occur in the first three minutes, measured from the moment the victim collapses to when the defibrillation shock is delivered. Therefore, having an AED readily accessible wherever groups of people gather makes good preventive sense.

Did you know?
Such factors are setting a new standard of care. And the results can be dramatic.

Early defibrillation is one of the American Heart Association's (AHA) four cornerstones in the Chain of Survival, which is now the worldwide guideline for response to Sudden Cardiac Arrest. The AHA believes that early defibrillation could save as many as 50,000 lives each year. One of those lives could be yours, or that of someone you care about.

Like fire extinguishers, AEDs in public places are becoming an expected standard

AEDs were introduced in 1979, and since that time hundreds of thousands of AEDs have been placed in police cars, airplanes, airports and bus terminals, hotels and casinos, sports arenas, high schools, manufacturing plants and other public places.

Such factors are setting a new standard of care. And the results can be dramatic.

Documented Increase in Survival Rates
It has been proven that AEDs can dramatically improve survival rates for Sudden Cardiac Arrest. In two studies, survival rates exceeded the national average by 10 times when AEDs were readily available.

In one of these studies, published in the New England Journal of Medicine, survival rates in witnessed cases of SCA due to ventricular fibrillation reached 74 percent when the first shock was given within three minutes.

These studies prove what has been intuitively known for years: early defibrillation by trained laypersons works and the earlier SCA victims are defibrillated, the better the outcome. 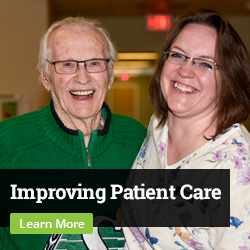